AS PREP JUNIOR RHEINHARDT HARRISON (Nease, Ponte Vedra, Florida) prepares for an attempt to unseat Jim Ryun as the youngest-ever prep sub-4:00 miler, the moment feels right for revisiting our 50-year-anniversary look back at legend Ryun’s history-making first prep tour under the barrier, which originally ran in the July 2014 issue. Monumental as it was in 1964, our account reminds that Ryun’s 3:59.0 run came in an astoundingly great meet, the Compton Invitational of that year (June 5), and was overshadowed in the post-event headlines. Ryun’s age at the time was 17 years, 1 month and 7 days (6247 days). For Harrison’s attempt (March 19) he will be 17 years, 1 month and 4 days old (6242 days). 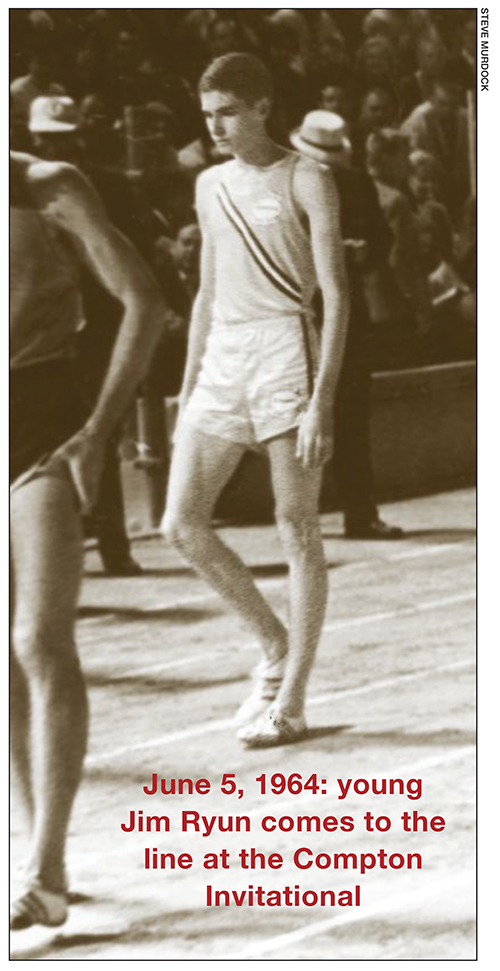 Context. It sometimes astounds, especially in retrospect. The late spring of ’64 when Jim Ryun fought his way to 3:59.0 at the Compton Invitational (June 5, 1964) was very much one of those times.

Sure, a photo of the boy miler who had broken 4:00 made the then newspaper-style front page of T&FN, but only in a group shot with two other HS recordsetters. Their accomplishments were easily just as noteworthy, at least to track aficionados.

Not only did the tiny Lindgren (4th after pounding near the front the whole way) set a national standard that would stand for 40 years in that race, but soon-to be Olympic champion Bob Schul shocked with a 13:38.0 AR win over highly regarded Bill Baillie of New Zealand.

T&FN Editor Bert Nelson proclaimed the metric 3-mile “the best race I’ve ever seen,” and his magazine co-founder brother Cordner called it “the most significant race by American distance runners in history!”

That was the context for Cordner’s verbiage about the mile — at the time the deepest 4-lapper ever. Before that night only 9 Americans of any age had ever run under 4:00.

T&FN‘s coverage of the Compton mile didn’t come until the story’s 14th paragraph:

Coming only half an hour after that exciting 5000, the mile was somewhat anticlimactic, but a residue of excitement plus a fantastic mass finish made it one of the great races, too.

Jim Ryun, a 6-2 high school junior, ran 3:59.0 and finished 8th but he was only 12 yards behind the winner. Average time of those eight Americans was 3:58.25. Four runners were under 4:00 for the first time. Every runner changed positions somewhere on the last lap, most of them several times. Archie San Romani had the fastest last lap (54.9) and was fastest in the stretch, gaining on everybody. He and Dyrol Burleson each ran the last 120 yards in a sizzling 14.2.

Burleson — previously a 3-time NCAA champ — won in 3:57.4 after kicking past fellow Oregon alum Jim Grelle, the leader at 1500, in the stretch.

Cordner Nelson saved a detailed account of Ryun’s race for The Jim Ryun Story, a book published by T&FN 3 years later. As his prose makes clear, sub-4:00 was without question Ryun’s target when he toed the line in Compton after a spring in which the High School Record was very much a target.

At the California Relays in Modesto, Ryun, having flown in an airplane for the first time, smacked the record down to 4:01.7. Suddenly, 3:59 was an immediate goal.

Bob Delaney, designated to set the pace as Ryun remembers it, led the first lap in 57.9. That’s where the following excerpts from Cordner’s book begin.

Nobody followed [Delaney) closely. Jim was near the front in 59.2. Of the real contenders, only Grelle was ahead of him.

Instructed by [coach Bob] Timmons to go out in front instead of staying in the back, Jim tried. “It wasn’t that I couldn’t hold the pace, but everyone started going around me, one at a time.”

On the second curve of the next lap Jim was still in the middle of the pack when the blow fell.

Jim was bumped by another runner. Perhaps someone with good balance would have recovered easily, but Jim stumbled across the curb into the infield. For a few unbalanced strides he was in danger of falling, but after everyone had passed him he regained the track and continued the race. He had lost a full second, but even worse, he had used valuable energy and had lost the rhythm of his stride…

Where another might have quit with discouragement, or let the pack go, Jim went after them, more than holding his own….

His time for the 880 was 2:01.5 — 3½ seconds faster than at Modesto. All was not lost. He still had a chance… if the lost second was not too much. He stayed with the pack all around the third lap and at the end of it he forged a few inches ahead of Weisiger in 3:02.8. He was about 9 yards behind the leader, Groth…

His head was writhing from side to side in apparent agony. Timmons said he looked as if he might step off the track after being bumped. “But,” Timmons said, “There’s something inside him. I’ve never seen him where he didn’t compete. Boy, I mean he’s a tiger.”

And try he did, hanging on with raw courage. At 1500 meters the order was unchanged. Jim ran 3:43.5, only 0.6 behind the leader, Grelle. Then the sprint started.

Burleson, O’Hara and [East Wichita alum] San Romani cut loose and ran away from the others. Jim kicked as hard as he could, but he could see them running away from him. He gained slowly on Day but he could not catch him, and Weisiger went past him in the last few yards.

Disappointed, and sick with fatigue, Jim tried to keep moving. “I was real discouraged, because I thought I had run poorly,

and here they had brought me all the way to the coast for this meet. I thought I had blown my opportunity for four minutes.”

After a few seconds, the announcers excited voice proclaimed that eight men had broken four minutes in the mile.

Jim thought, “Did I finish 8th or 9th?” He tried to remember if anyone of the starters had finished behind him, but he was too excited to remember. He had to wait in suspense until the announcement…

He had reached his goal. He was the first high school boy to break four minutes, and he had done it in spite of falling off the track and losing a full second. A solid joy began to replace his fatigue, but he was careful to keep it to himself. Later he admitted, “I was real happy. I reached my goal.” □