We’re off and running for the T&FN tour to the USATF 2019 National Championships in Des Moines, Iowa. The hotel we’ve selected is the AC Hotel by Marriott Des Moines East Village, a new hotel with all the comforts and amenities, located in the lively East Village area of Des Moines. The hotel has a restaurant (there are several other restaurants in the neighborhood), a lounge and a fitness room.

THE U.S. NATIONALS AND DRAKE STADIUM

The meet will run over four days, Thursday July 25, Friday July 26, Saturday July 27, and Sunday July 28. This is a month later than the usual Nationals dates, but it was scheduled due to the lateness of the IAAF World Championships which will be held in Doha, Qatar, September 27-October 6. This meet of course serves as the trials to select the U.S. team for Doha, and as such will be replete with all the drama and thrills you expect at any trials, for the Olympics or World Championships.

Drake Stadium is Drake University’s main stadium. It hosts the annual Drake Relays, and is also the venue for Drake’s football and soccer teams. Capacity is 14,557. 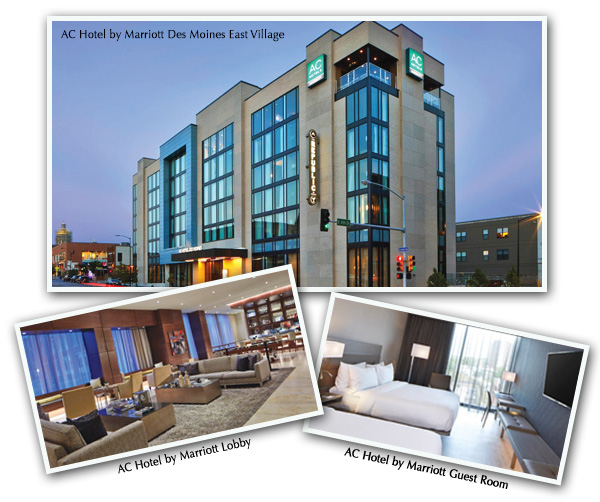 You have the option of staying for three, four, or five nights, as follows:

The tour price includes 3, 4, or 5 nights at the AC Hotel by Marriott Des Moines East Village, daily breakfast, prime tickets to the meet, busing to/from the stadium, airport transfers, tour dinner party on Saturday night, goodies, and so on.

We don’t expect to see a final meet schedule until March or so, but we strongly believe that the start of events on Thursday will be about 11am, and the final event on Sunday will be over by 3pm.