For the 10 months since the end of June last year, Mt. San Antonio College—the Walnut, California, campus better known as Mt. SAC and famed for the April relays meet it has put on for six decades—was set to host the ’20 Olympic Trials. Now that is apparently off the table.

On a May 1 conference call with the Southern California would-be Trials organizers, USATF delivered the news that its Board had voted unanimously to nullify the site selection and reopen bidding for the Olympic selection meet and choose a new Trials site. Reportedly, neither USATF CEO Max Siegel nor any Board member joined the call.

In a release announcing its decision, the USATF Board cited uncertainty over “two lawsuits seeking to halt construction of [a planned new] stadium: one between the City of Walnut and Mt. SAC and a second, between United Walnut Taxpayers (UWT), a group of local citizens and Mt. SAC.”

The USATF release affirmed the Board’s intent to select a new Trials site “no later than this June.”

Bid groups from the two cities that lost out to Mt. SAC last summer immediately signaled intent to bid again. Despite having stadium replacement hurdles of its own to clear, TrackTown USA, Eugene—site of the last three Trials and the venue picked to host the ’21 World Championships—is very interested. So is Sacramento, site of the ’00 and ’04 selection meets.

“We’re very excited about the possibility of welcoming America’s best track & field athletes to the Eugene-Springfield community, to a beautiful new Hayward Field in 2020 as they pursue their Olympic dreams,” TrackTown CEO Michael Reilly told the Portland Oregonian.

Sacramento Sports Commission director Mike Sophia told the Orange County Register, “We are interested in bringing the Trials back to Sacramento and we look forward to seeing the details of the bid process.”

Mt. SAC officials, for their part, reportedly had no inkling rejection was bearing down on them. “I think we were a little blindsided. We’re disappointed. The [legal] cases were going our way,” Brian Yokoyama, Mt. SAC division information director, told OCR reporter Scott Reid.

Mt. SAC President William T. Scroggins responded with a written statement that read in part, “The two lawsuits that were mentioned have either been settled or ruled by a judge in our favor. We remain confident in our ability to deliver a completed stadium on time and a successful event.”

The City of Walnut has dropped its dispute with Mt. SAC over site grading permits and other concerns and settled out of court. Resolution of the UWT suit, scheduled for trial in January, may also lie just over the horizon, according to Mt. SAC officials.

San Diego Times reporter Ken Stone penned a piece quoting Abou Taleb, president of the UWT group to the effect that her organization has never opposed the ’20 Trials hosting in their town or even construction of the stadium. UWT’s issue, Taleb told Stone, is Mt. SAC’s funding source for stadium construction, a bond measure UWT asserts was never intended to fund the $87 million renovation of SAC’s Hilmer Lodge Stadium.

According to Stone, Taleb even expressed an interest in settling with Mt. SAC out of court.  “I’m baffled,” Abou-Taleb said. “I really don’t know why [USATF] made the decision initially to give it to Mt. SAC or why they made the decision at this point to withdraw it.”

Among the two past hosts who’ve expressed interest in tilting for the Trials again, Sacramento has its venue, Hornet Stadium, most recently the site of the ’17 USATF Championships, lined up free and clear.

Eugene Not A Slam-Dunk Option

In April after two years of direction changes and delays on the Hayward Field renovation it must complete for its ’21 World Champs hosting, Oregon unveiled its plan for a total rebuild of the iconic track stadium—at a cost, according to some sources, of $200 million in private donations—with a projected completion date before the ‘20 season.

“When complete, Hayward Field will be nothing less than the finest track & field facility in the world, emblematic of the risk takers and innovators who have made Oregon great,” university president Michael H. Schill wrote. “The new design for Hayward Field is awe-inspiring, amazing, and completely in accord with the university’s relentless pursuit of excellence in everything that we do.”

Probably? Maybe? A week after those plans were unveiled, Eugene’s City Council voted unanimously to consider an application by rebuild opponents to nominate Hayward’s East Grandstand as a protected landmark. If that application is approved, sending the architects back to the drawing board, further construction delays are a near certainty.

At the other end of the West Coast, Mt. SAC’s Yokoyama told the OCR, “Our stadium will be finished [by 2020]. That’s a non-issue, although apparently not to USA Track.”

Subsequently Doug Todd, Mt. SAC’s director of special events (which include the Relays and the college’s venerable cross country invitational), told T&FN via email, “As of right now we have no plans to bid [for the Trials] during this new window. Our President, Dr. William Scroggins, spoke with a USATF official this afternoon and agreed on the importance of maintain a positive ongoing relationship.”

With regard to UWT’s legal challenge to stadium construction, Todd wrote, “Our position is and has been throughout this process that even if they are successful in their request to prevent us from spending bond money on our project we have alternative funding resources. This means that construction will continue unabated regardless of the outcome.”

Short conclusion: Don’t book your tickets to any ’20 Trials site just yet. □ 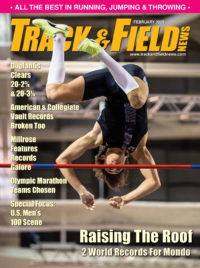