The authors are on the faculty of the Jerzy Kukuczka Academy of Physical Education, Katowice, Poland. Matusińiski and Iskra are in the Department of Individual Sports, Golaś in the Institute of Sports Sciences. In this detailed study they recount the training plan and history of Poland’s top women 400m runner, Justyna Święty, world ranked 9th in 2019 by T&FN.

The tradition of training analysis for the 400 meters dates back to the second half of the 19th century, the period of the development of track & field structures in the United Kingdom (Shearman 1894/2007) and in the USA (Potts 1993, Sears 2008). The next 150 years of track & field have seen many changes, modifications and often revolutionary solutions to the principles of training of the one-lap run.

The women’s 400m run in Polish track & field has a special place. The first Polish championship in this sprinting event was held in 1952. However, it was only the athletes competing in the women’s 800 (Elżbieta Katolik: indoor European champion in 1974) and the 400 hurdles (Krystyna Kacperczyk: world record holder in 1974) that allowed the Poles to catch up with the European elite in the 400 meters.

Competition at the global level started when Irena Kirszenstein-Szewińska became interested in running this event. Szewińska’s first starts in the 400-meter dash (1974) yielded the best results in the world.

In 1974 Szewińska was the first woman in history to run the 400m in less than 50 seconds (49.9), and two years later she accomplished the same with electronic timing (49.75). At the Olympic Games in Montreal (29 June 1976), she won with a huge advantage over her competitors and set another world record.

It is difficult to find such an outstanding female athlete in Poland (or elsewhere) as Irena Szewińska, who died in 2018, but in the same year, the 400 gold medal at the European Championships in Berlin was won by a Polish female athlete—Justyna Święty-Ersetic (later Justyna Święty). The result of 50.41 seconds was the best on the European continent that year and 12th in the world.

Justyna Święty-Ersetic trains in the academic center of the Jerzy Kukuczka Academy of Physical Education in Katowice and is coached by Aleksander Matusiński. Currently, Justyna Święty-Ersetic is the second fastest (after Irena Szewińska) Polish runner all-time in the 400 meters (50.41) and is the national indoor record holder (51.37 in 2020).

Our study examines the problems of training for the 400 meters. The analysis took into account women’s sprinting, with particular focus on the training concepts used by the 2018 European Champion. The coaching and publication experiences of Prof. Janusz Iskra (1991-2012), partially used by Święty’s coach, were also important to the success of the athlete.

1. A brief history of a sports career

Justyna Święty was introduced to the sport in 2003 in the 6th grade of primary school, at the age of 12 years. She was appointed to represent the school for the district indoor competition in the 400m shuttle race. In this competition, she placed second and was invited to the track & field section, with training sessions held once a week on Saturday. She liked the training and decided to continue her education in the sports class at the Athletic Championship School in Racibórz, Poland. There, at junior high school age (14 years old), she started to train regularly six times a week. First, she competed in endurance competitions and specialized in the 600 meters and cross country, repeatedly winning medals at the Silesian Championships. The transition from junior high school to secondary school in the Athletic Championship School involved a coaching change. The new coach noticed the athlete’s talent for speed and decided to train her to compete in the 400 meters. In the winter season, the athlete continued to participate in cross country (2000m and 3000m) and indoor races (600m and 800m).

There was a very high level of 400-meter running in Poland at the time she was finishing her junior years. Therefore, she and her coach decided to look for a new event in which she could be the best, as she could not stand losing. That is why she participated in the Polish Junior Indoor Championships and won the 800m event. In the summer season, she made an attempt to prepare for the 400m hurdles and she achieved a very good time for a junior, but her running style (short strides, dynamic, with strong step) did not promise much progress in hurdling.

Since 2009 she has been competing continuously internationally and has won medals or placed in the finals in every competition she entered. In 2019, she had as many as 38 starts in various competitions, including 35 starts in 400m and 4x400m events. The high number of competitions was due to her high sports skill level: in individual races in championships, she has successfully completed all elimination rounds and has been often forced to run elimination races in relay races.

It may be interesting to note that in her entire career, Justyna Świety has only twice won the gold medal of the outdoor Polish Championships, although she often had the fastest times among Polish women at the target events. This was due to the training plan, in which the Polish Championship fell in the period of direct preparation for the World and European level competitions.

According to her coach, the major factors in progression of the athlete’s results in 2018 included consistent work in running technique (video analysis) through specific exercises, work on speed (speed exercises), running rhythm practiced on low hurdles, and modification of resistance training through, for instance, the use of post-activation potentiation (PAP), both in the gym and during maximum speed training (maximum runs preceded by sled pulls), as described below.

Personal best results in the senior category and the number of medals and starts in the target competitions reflect the very well structured training plan at the initial stage (comprehensive, general preparation) and throughout her professional career (special preparation based on high-volume training during the preparation period to develop both endurance and strength).

1. Characteristics of the athlete
See Table 1. 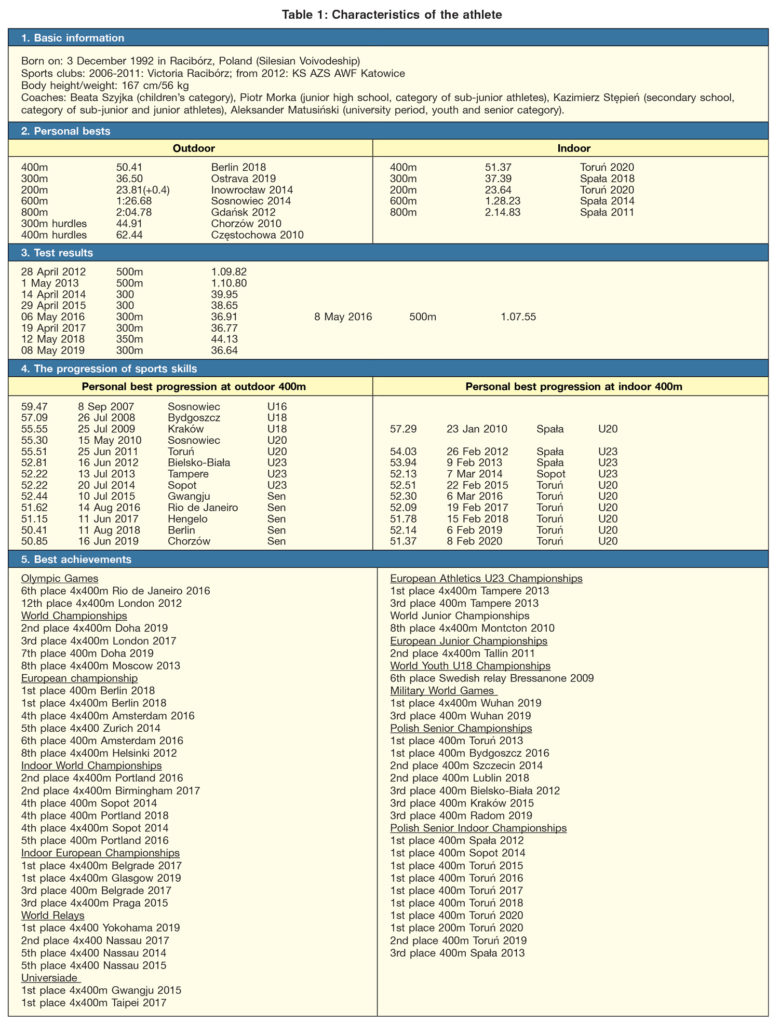 2. Training measures in the 400 meters

This analysis of training measures (exercises) was based on a set of speed (2.1), endurance (2.2) and strength (2.3) exercises. 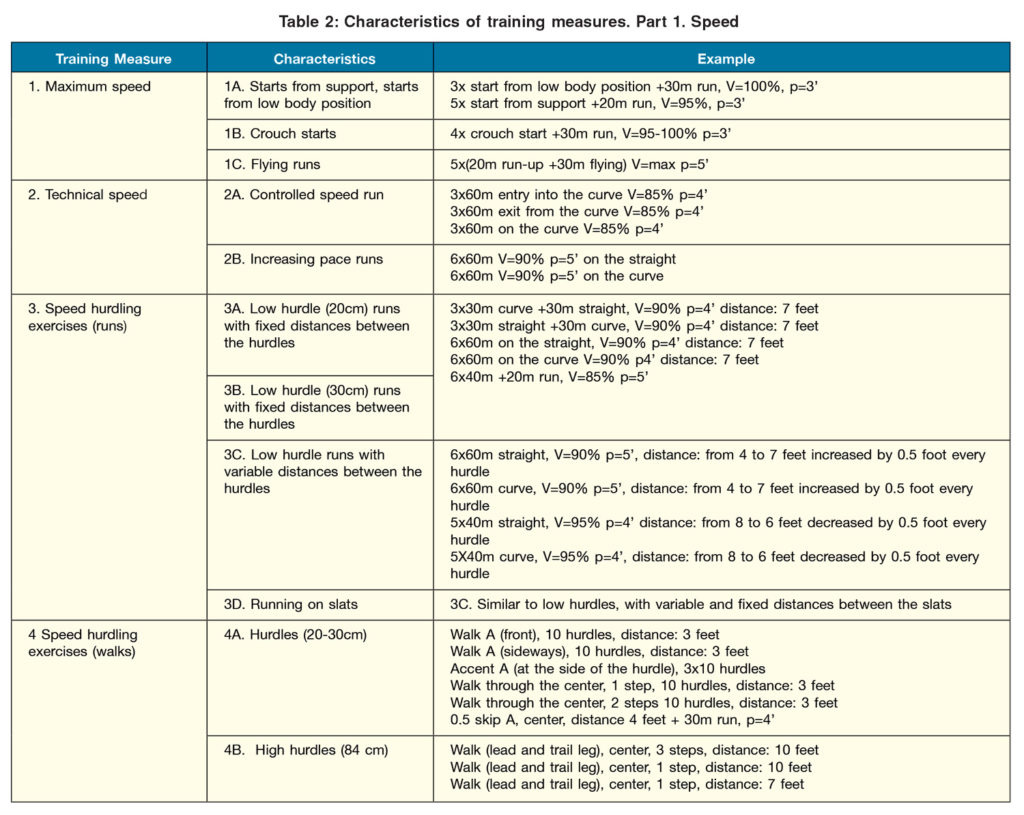 Running with slats (flat markers placed where hurdles would be) is the first element that was introduced in the first year of training with the current coach. The athlete performed strides between the slats at different distances (usually 7, 8 feet) depending on the preparation period, several times a week. This form of training was naturally integrated into classes, e.g. straight or curve strides as a warm-up in regular running shoes or running spikes. In the first stage, these strides aimed to lengthen the step and develop correct technique and running rhythm. In the following years, dynamic walks on low hurdles (20-30 cm) were introduced, usually in the form of a warm-up before speed training. The aim was to develop running technique, activate the foot (quick response with relation to the ground), quick change of the support leg, and correct angles of movement.

Although Justyna Święty won the Polish Indoor Championship at 200m in 2020, she is considered to be an endurance-type athlete. This is evidenced by her style of running, with a controlled first part of the distance and catching up on the last straight. She started running with cross country and is not afraid of long distance running: she even competed in a 10-kilometer street run. Therefore, endurance is a main characteristic of the athlete. In general, apart from the competitive and pre-competitive period, endurance training sessions in various forms are held at least four times a week. Sessions focus on endurance combined with various motor skills, e.g. aerobic endurance with strength or speed with speed endurance.

Years of specialized training in the 400 meters has transformed the athlete into a sprinter to such an extent that these days she avoids maximum efforts on distances longer than 500m (the last 600m test was performed by the athlete in 2014). Depending on the need, the coach also uses longer stretches in training, but not of high intensity.

Due to her high sports skill level and the fact that the athlete has ideal conditions for training (she travels 4 to 5 times a year to training camps), mountain hikes and pace endurance elements (often performed in Poland) were substantially limited. In warm climates, the athlete can perform better quality training and take care of movement technique and appropriate intensity.

Low-intensity endurance is developed throughout the year, but this is used as the major part of training only in the initial part of the preparation period (in October and November) and in a shortened form after the indoor competition in March, in the period of special preparation and the competitive period (as a warm-up or recovery after a high-intensity training session or a competition). It is these low-intensity and high-volume efforts, which are often performed in the form of fixed-time segments, that are her favorite training elements.

According to the coach, speed, special and complex endurance has the greatest effect on improving endurance in the 400 meters and therefore he uses such sessions most often. During the special preparation period, the comprehensive endurance elements are often repeated, combining lower-intensity pace endurance with shorter rests with race-pace exercise with long rests. This training is a combination of work at moderate lactic load and high-volume with efforts at race distance. The athlete is not only supposed to put in miles but also to “remember” the heavy glycolytic character of the effort in the 400 meters.

An interesting solution in speed endurance training was the use of crouch start runs. The 150m runs at an intensity of 90-95% performed from starting blocks allowed the athlete to feel the pace of the run and dare to start running faster. 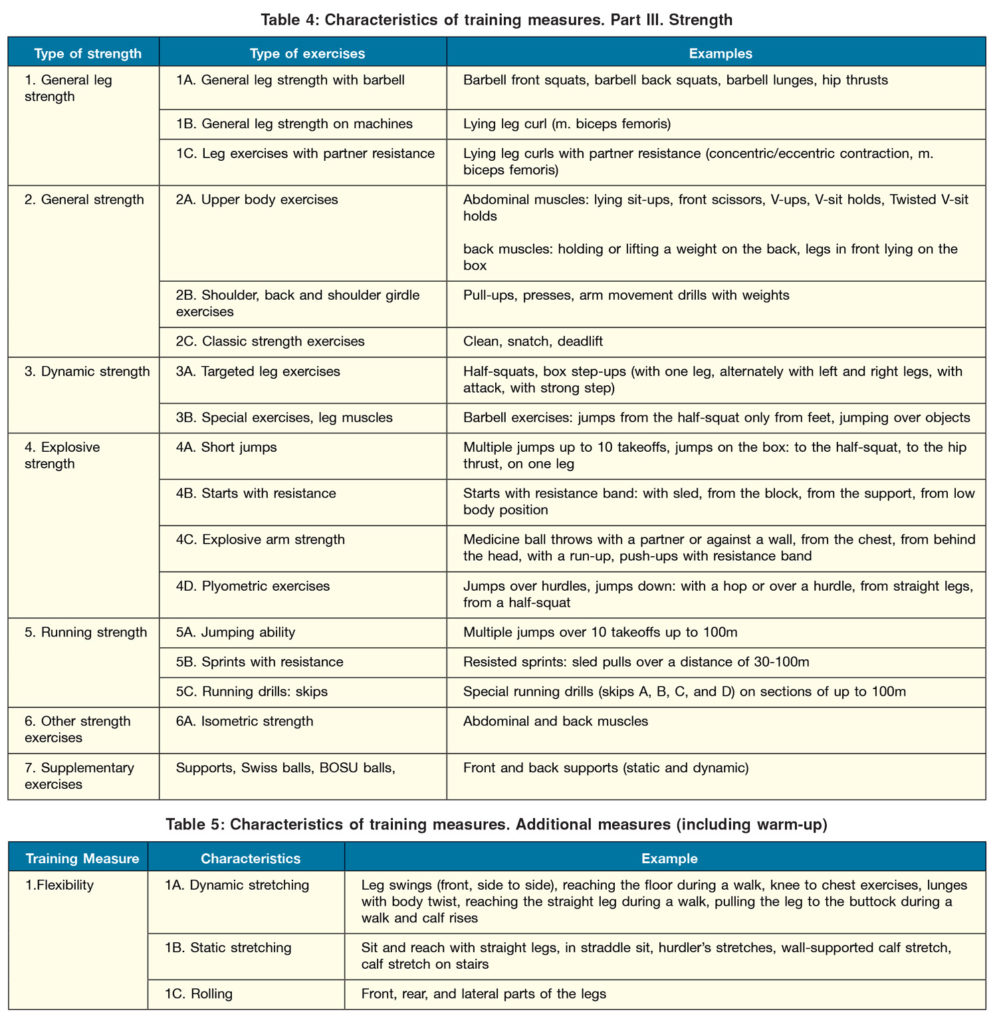 Strength is a critical factor in the preparation of the athlete. Resistance training seemed to result in the biggest progression in results after the change to the current coach. In her years as a junior athlete, she did not perform strength training with heavy weights in the gym but she learned the correct technique of performing these exercises and strength was shaped in the form of running strength exercises and throwing medical balls. In strength training, similarly as in improving other motor skills, the athlete uses periodization, passes from initial adaptation exercises to muscle hypertrophy, maximum strength and power. Resistance training is performed twice a week throughout the entire annual training cycle. The second strength training session involves different exercises, engages different muscles or the same muscles in a different way, and is of a different nature when it comes to using energy sources. For example, the athlete performs squats on Mondays and half-squats on Thursdays or a series of up to 10 repetitions on Mondays and 10-20 repetitions on Thursdays (at the beginning of the preparation period) of a given exercise. During the competition period, the athlete performs one basic strength training session a week, with reduced volume (ca. 70% of the load from the pre-competition period) and the second training session with a barbell, focused on dynamics.

According to the coach, the most important element in strength training is not personal records in strength exercises, but the correct performance of the exercise and transformation into sport-specific abilities. Therefore, after each session of strength training, the athlete performs running drills such as skips, jumping, and aerobic endurance exercises.

In 2018, the coach introduced post-activation potentiation (PAP), which, according to the coach, had the greatest effect on dynamics, speed, and consequently, on Justyna’s results in the 400 meters. PAP, i.e. performing a dynamic exercise specific to the event preferred by the athlete following the activation of neuromuscular connections, consisted of jumping up, jumping on the box, jumping over objects, or fast strides immediately after performing the exercise at a minimum of 70% of the maximum load in a squat, half-squat, dead lift or a clean. See Table 5.