This is an excerpt from the forthcoming book, “The Pole Vault: A Violent Ballet,” by Rice University Assistant Coach David Butler.

Back in the day, when vaulters first used wood, then bamboo, then steel and aluminum, they had to figure out the ways to get the pole to accelerate toward the pit. This was very important, because these pathfinders of the pole vault, had to land on upturned earth, sand, or sawdust (or a combination of all three) and they did not want to come up short. Landing was hard enough without falling back onto hard ground. Rough landings did not feel good. Another reason these forerunners developed the techniques they practiced in the vault was to clear a higher bar. They wanted medals, records, and PRs. So, the straight pole or steel vault was created and progressed right up to the invention of fiberglass.

As the early fiberglass vaulters learned the mechanics of a bending pole, they utilized their longstanding, proven straight pole techniques and applied them to moving a fiberglass pole.

Techniques they practiced that strongly apply to rotating fiberglass.

I know this seems simplistic, but that’s the beauty of it. Jump like Warmerdam, Gutowski, Richards, Meadows, or Smith, and your straight pole work will morph into a beautiful, accelerating vault. 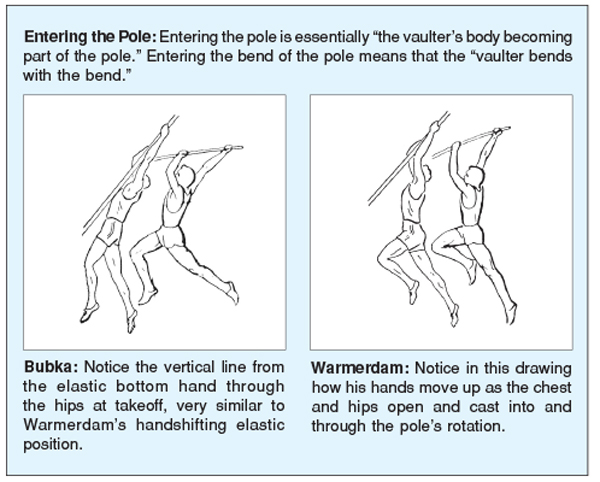 To be able to enter, the vaulter must allow his/her body to elastically expand into and toward the pole. The old straight-polers did this by shifting the bottom hand up to the top hand, creating an open, stretching and casting of the hips up toward the pole. Both hands together and stretching up and back, accelerated the body into a powerful giant swing to vertical.

In fiberglass vaulting, the bottom arm bends at the elbow and the hand expands to a vertical line from the hand and through the hips. This is entering the pole and accelerating the pole.

The sequence of learning to get this “elastic plant” extended above the head?

In the late 1980s and early ’90s, a few vaulters began a new technique. The blocking of the arms/shoulders became the big left arm and forcebending the pole became all the rage. To this day, many vaulters block off the ground, then break the pressure to swing past the pole. Yes, this blocking, breaking, or rowing to attempt to get upside down IS a way to pole vault, but I believe the natural, historical method moves the pole in a better air pathway.

Entering the pole in what is called elastic can really create a high invert on top of the bend of the pole. I suppose Sergey Bubka is the one to study, but most of our youth do not study the vaulters of the past. I truly believe that we all must know who came before, to know where we are going.

The gradual raising of the bottom arm from a flexed, frozen position to a full extension is a natural progression of pushing the pole higher and higher toward the vertical. It is a great way for the vaulter to learn to pole vault. It is a technique born in sawdust and sand.

David Butler, who some have called the “zen master of the pole vault” has been a track & field coach for more than 40 years. For the past 20 years, he’s been an assistant coach at Rice University. A recognized historian and technician of the pole vault, he has given clinics in Thailand, Japan, Finland, Germany, Canada, the Dominican Republic and Puerto Rico. 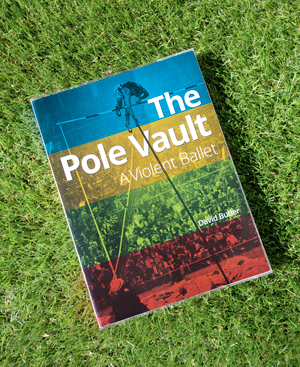 Bend with the bend of the pole. Enter the pole and feel the power of the vaulters of history. Vault in their spike steps of the greats of the past. Vault like a sawdust vet.