From the Editor – RUSS EBBETS

A Stitch In Time

Ben Franklin is credited with penning “a stitch in time saves nine.” I’m not sure if tailor was one of his many jobs along the way but regardless he made his point. Proactive efforts now can negate long-term problems in the future.

This doesn’t seem to work well with politics. I remember one of my poly sci professors smugly telling the class that the #1 job of a politician is getting re-elected. As an early 20-something I thought that was a pretty cynical statement about people who were presumably dedicating their lives to public service. But the serving, I see now, is more of the self-serving kind and the avoidance of dealing with real issues where the politician simply “kicks the can down the road” and lets someone else deal with the problem later. Realizing this one begins to understand why we we’ve got what we’ve got.

This delayed action is not a good idea for society and doesn’t work well for personal health either. At one time or another we all are guilty of it. We have a little ache or pain and make the decision to “gut it out” figuring it will go away. Sometimes we get lucky. A good night’s sleep, a hot shower and the decision to self-medicate may resolve the problem—or at least bury it below our level of waking consciousness.

But sometimes “it” lingers on. Two days turns into a week or month and whatever state you’ve slipped into is accepted as one’s “new normal.” Certainly, that is one way to deal with life, but it is a nine-stitch method. 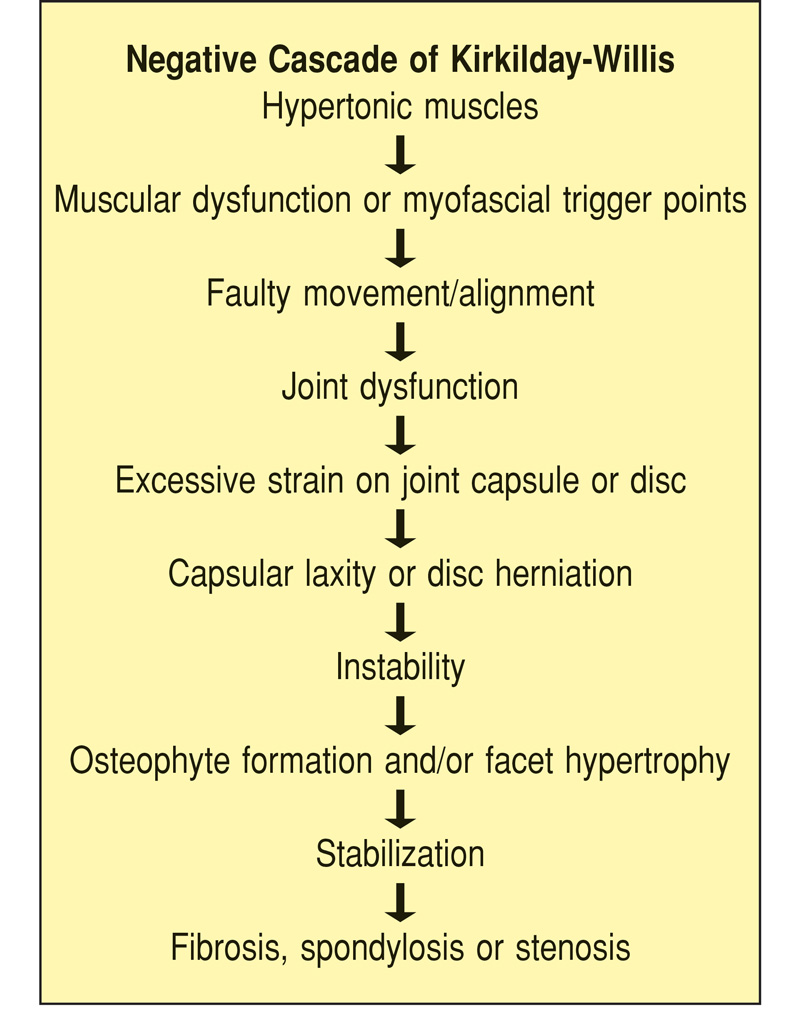 Left to their own devices most conditions will progress if the problem is not addressed. Canadian physician Kirkilday-Willis created a cascade of physical events that sequentially documents the downward spiral of musculo-skeletal conditions that results from letting something “get better on its own.”

The box on page 7186 details this natural slide which many may dismiss as natural aging. The problem with accepting this “natural slide” explanation is that it begins to justify a sore muscle at age 19 as a life sentence.

The good news here is that if one can intervene in the first four or five steps of Kirkilday-Willis’s ladder the process can be reversed. This could entail a habit change, new routine or therapy intervention that allows one to essentially return to the start and get a “do-over.”

One needs to resolve to make a personal change. The use of study, observation or consultation with someone more experienced are paths that may help mitigate and even reverse a situation. One needs to remember the old cliché that health is a journey, not a destination.

This should all fit seamlessly into one’s philosophy of coaching. No doubt one of the core values of all successful programs is that of self-responsibility. This is an ever-evolving process as one learns to pack a travel bag as a Junior Olympian through the juggling act of the professional Olympian who deftly manages marriage, shoe deals, training, travel, the media and competition.

For the true procrastinators in the crowd, the one’s with their heads perpetually in the sand, there is some good news here. If you read the last line of Kirkilday-Willis’s cascade you’ll see “fibrosis, spondylosis and stenosis”—all conditions where things shrink, degenerate or stop moving. It is a decrepit state that most don’t live long enough to achieve. No doubt some solace there for some, I guess.