Snatch, clean and jerk in the training of young athletes.

Throwing is a fundamental motor skill that consolidates during the first decade of life. Learning how to throw represents a fundamental milestone in the cognitive and physical development of children, especially between the age of 4-5 years old and the age of 8-9 years old, a narrow window of time also known as the golden age of motor learning (Thelen, 2000). Overarm throwing mechanics improve throughout childhood and can soon evolve into more advanced skills such as throwing a javelin or putting a shot. Youth athletes age 9-12 practice basic throwing drills with 6-pound shots and 300g mini javelins, with no difference between boys and girls. It is not until the onset of puberty—between the age of 11 and 13 years old for the female athlete and between the age of 12 and 15 years old for male athletes—that implements progressively become heavier and young athletes start throwing the discus and the hammer.

According to the most recent long-term athlete development (LTAD) model described by Lloyd and Oliver (2013), the circa-pubertal phase, represents a relatively common landmark for sports specialization among strength and power athletes. As young throwers become faster and stronger, their throwing mechanics change to accommodate more speed.

Strength—relative strength, a better estimate of the change in the rate of force development occurring during early adolescence—does, therefore, become a limiting factor in developing elite level throwers, as stronger and more powerful athletes can better handle linear and/or rotational speed.

Increasing speed of release represents, however, the very last step in a progression that goes from basic overarm throwing drills mostly oriented toward skill development and accuracy (age 4-6) to more advanced bilateral and unilateral drills where distance, and therefore rate of force development, comes into play (age 9-11).

It is not usual for young and adolescent throwers to practice with lighter and/or heavier implements in the effort to improve speed and strength. Although valuable, there is only a limited amount of time that can be spent working with overweight and underweight throwing drills—10-15% heavier and/or lighter than a regular discus or shot—10-14 pounds for a 14-15 year-old boy and 6-10 pounds for a girl—and only a limited amount of weight that can be used before throwing mechanics starts deteriorating. Longer periods of time practicing with overweights can make athletes, especially young athletes, slower by affecting timing and coordination to the point that speed or release starts to decrease (Verkhoshansky, 2011). Similarly, a higher volume of training with the use of underweight can limit the ability of an athlete to increase strength, simply because of lack of necessary overload. It is, therefore, necessary to implement age-appropriate general and special strength training exercises in the effort to increase speed of release and improve overall throwing mechanics.

Young athletes can benefit from strength training as soon as they are capable of understanding and relate proper lifting mechanics with some of the basic skills in sports. This stage is also known as the formal operational stage—see Jean Piaget (1896-1980) and his theory on cognitive development—and it precedes by a few years the onset of puberty. Between the age of 7 and 12 years, young athletes are capable of processing information at a higher level (organized and rational thinking), developing logical connections between different experiences.

The same way young athletes learn how to throw a shot from the power position before learning the art of gliding and spinning, they can also learn how to snatch, clean and jerk after they practice pulls and high pulls. Their ability to relate these similar experiences represents a prerequisite for them to be able to learn and master sport-specific skills (SSS). 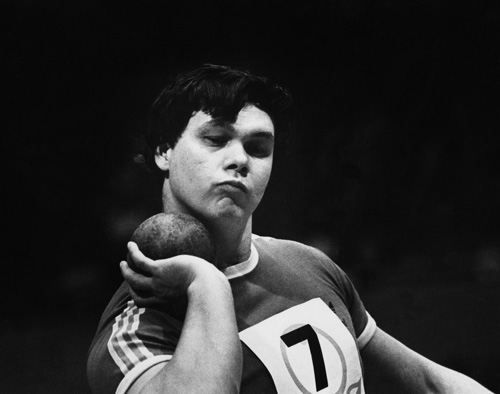 This positive carry-over between similar movements—lifting and throwing, but also similarities between many different fundamental motor skills (FMS)— is also known as positive transfer of learning and it represents one of the most valuable assets in the training of young athletes. By learning skills that are so similar in nature—the triple extension of hips, knees and ankles, also known as the “pull” in Olympic weightlifting (Enoka, 1979) or the “thrust” in throwing mechanics (Garhammer, 1978) share important similarities in terms of joint angular displacement, peak power output, peak vertical velocity and rate of force development. Young athletes can improve performance in sport to a much greater extent than what numbers seems to suggest. Transfer of training only takes into consideration the quasi-algebraic relationship between strength, speed, power, and performance in sport. However, the positive carry-over between similar drills and exercises can further support the development of sport-specific skills, creating a solid foundation of general athleticism.

Weighted pulls and basic overarm throwing drills—the foundation in the training of young and adolescent throwers—are nothing but different examples of advanced body transport, object manipulation skills—according to Antoinette Gentile (1936-2016)— involving a higher degree of in-motion regulatory conditions and intertrial variability such as throwing a shot or snatching a bar overhead. Because of their similarities in terms of invariant features (a term that according to Schmidt’s original general motor pattern theory [1975] describes the permanent traits among variations of similar movements such as relative timing, relative force and movement sequence), pulls and high pulls provide the opportunity to increase positive transfer of learning between general and sport specific skills. Weighted pulls represent, therefore, a valuable asset in the training of young throwers as they are taught how to overcome inertia with speed as they develop proper mechanics in the triple extension.

As young athletes learn the basics in Olympic-style weightlifting they learn how to exert vertical force against the ground and transfer it to the implement (the bar) in the effort to increase its momentum. This summation of force via the triple extension of ankle, knees and hips also provides the prerequisite to learn how to convert linear speed into speed of release in some of the basic throwing events (Lanka, 2000).

Weighted pulls—pulls and high pulls—provide the opportunity for young throwers to improve some of the most fundamental aspects of throwing mechanics while developing strength, speed and power. Learning the basics in Olympic weightlifting begins at a very young age and represents, therefore, a fundamental milestone in the training of elite level throwers. As athletes become faster and stronger, heavy snatch, clean and jerk should be incorporated into their training in the attempt to prioritize peak vertical bar velocity over weight, namely power over absolute strength.

Male and female athletes between the ages of 7 and 11 years become capable of developing more complex and coordinated movements by rationally assembling fundamental motor patterns into more sophisticated skills. A 14-year-old thrower who has already learned how to snatch, clean and jerk and has been back squatting and front squatting for more than two or three years has, therefore, much better chances of becoming a stronger, more powerful athlete after the onset of puberty. Today we consider this carry-over between fundamental and sport-specific skills as the most elementary example of transfer of learning (Seidler, 2010). Piaget’s formal operational stage, the circa-pubertal phase that immediately precedes and follows peak height velocity (PHV)—represents undoubtedly the most appropriate time to introduce young and pre-adolescent athletes to the skill of lifting weights.

After the onset of puberty, the discrepancy between male and female athlete in terms of absolute strength becomes, indeed, more significant. However, if properly trained, pound per pound females should be no more than 12-15% behind male males with similar training experience when it comes to relative strength. Young throwers age 15-16 with three or more years of experience in strength training should be able to squat anywhere between 1.1 and 1.5 times their body weight (respectively, female and male athletes), snatch between 0.5 and 0.7 times their bodyweight and clean and jerk 20% more (Keiner, et al., 2013). At this age, lack of absolute strength usually results in a snatch to clean and jerk ratio of 78% or lower, as a consequence of a much heavier clean and jerk and a relatively slow pull in the snatch. Faster athletes—more efficient, better throwers—on the other hand, tend to have a higher snatch to clean and jerk ratio (82% or higher) with peak vertical bar velocity in the pull approaching 1.98 m/sec (Takano, 2012).

“Numerous studies and review articles have reported evidence and logical arguments for the use of explosive exercises for throwers” explains Dr. Lawrence Judge from Ball State University (Indiana). Heavy strength training and absolute strength are without a doubt of paramount importance in developing elite level throwers. Brute sheer strength, however, is meant to be the consequence and not the main reason why athletes squat, bench press and power clean. “Elite athletes should strive to improve vertical bar velocity as they manage to move submaximal weight at maximal speed” (Poprawski, 1987); explosive in nature, the snatch, clean and jerk are meant to develop speed over sheer brute strength, representing the core exercises in the training of elite level throwers. Some of the unique aspects of competitive weightlifting (Storey and Smith, 2012), can, indeed, improve general athleticism, creating the foundation for throwers to develop the necessary skills and physical attributes to compete in sport.