This is a program newly developed in Britain for elementary school children, introducing them to certain track & field events and providing a rating system for individual performance and development. The could work in the USA.

5Star5Steps is a scheme for primary schools (7 to11 years of age) designed to assist non-PE specialist primary school teachers to confidently provide enjoyable, technically and educationally sound track & field based activities for children. It is also designed to be flexible (indoors or out, adapt as necessary), and to require minimal equipment and organization.

2. What is the history behind this program? When did it start?

I set up the Tony Ward Memorial Trust in 2012 (with three other trustees) in memory of my husband who was a prominent coach, writer and commentator on athletics (track & field). He was also the British Athletics Federation’s press officer from the mid-80s to mid-90s—a golden period for GB athletics. He was concerned about the state of coaching in Great Britian and wrote extensively about it. So the trust’s aim was to improve young people’s access to good coaching in Cumbria where we live—a large but rural county in England with few facilities and relatively sparce population—i.e., more sheep than people!

Regarding 5S5S, it had long been an objective of mine to bring back the Amateur Athletics Association’s highly successful 5-Star Award scheme for secondary schools (11y to 18y). It had scoring tables so that children could track their progress. They then had to select two track events and one field, or two field and one track, tot up their score for the three events to get either a 1, 2, 3, 4 or 5-star award. There were badges and certificates and practically every school in the country took part. But, as its creator, Tom McNab, (a National Coach at that time) has said, it didn’t have coaching points. It raised a lot of money for the sport via sponsorships and many other excellent projects came out of that. But the AAA was disbanded prior to the formation of England Athletics in 1999, as there was pressure to professionalize the administration of the sport. As a result, 5-Star Awards fell by the wayside. Subsequent schemes for schools did not have the same impact as 5-Star Award had, probably because they were too technically focused. Kids need to emotionally engage with a sport before they are bothered with technique. Ball games do this easily, but the way athletics is presented—well, often even specialist PE teachers who don’t have an athletics background themselves see it as too challenging. But the great advantage track & field has is that it centers on precisely measurable personal improvement—how far? how high? how fast? Once kids have bitten on this, the next question is—How do I get better? Then the learning and development starts. But you still have to keep it simple.

I discussed this with Cumbria Schools Athletics Association, who agreed but advised that a project for primary schools was a more urgent need than secondary. As it states on the website, I worked with an old friend—a very experienced and innovative coach, Shaun O’Donnell—on the website content and I got funding from a local authority community development grant to get the videos done and to set up the website. The scheme was piloted very successfully in 2019 – very positive feedback from the schools. Then the pandemic hit and schools closed. They have now reopened, but have been under all sorts of pressure, so we have not yet picked up the conversation with them about the project.

3. How much does it cost to administer the program? How long does it take to do a testing profile of an athlete? How many athletes can be tested at one time?

It costs nothing to administer the program because it was designed so that an individual school can do its own admin. The idea is that 5S5S can be a classroom activity. Children can measure and record their own performances, although teachers would need to time sprint and hurdles attempts. This could be done over a term (semester) with children’s best marks being retained for their award, or on a lesson by lesson basis. The object is to provide easily replicable run, jump and throw-based activities which can be adapted for a particular school’s circumstances.

4. From a time perspective is the testing usually done in one day?

The “testing” is integral to the activity. Standing long jump incremental marks can be laid alongside mats. Throwing distances can be pre-marked similarly, so that measuring is instantaneous. Precise accuracy to the nearest inch or centimeter is not necessary.

5. Do you charge the children a fee to be in the program?

No. Because we are grant aided to contribute to criteria set by the local authority (childhood obesity) for a set period, charging is not appropriate. Also we wanted to get the scheme fully established in the schools before considering how longer term funding would work. We did discuss an entry fee for schools once fully established. But Covid has disrupted everything for the moment.

6. What equipment is needed?

7. How are the results recorded? Is there one central location, a clearinghouse where all the data is kept? Are the results compared from one year to the next? Or are they just kept by the school or club?

For reasons outlined above results have stayed with schools (or clubs) rather than centrally stored.

8. Who uses this program? Schools and clubs? Is the 5-Star program used by different sports to identify talent?

It is designed for schools, but could be used by other groups/clubs to aid progress measurement and motivation.

9. Is the 5-Star Program mandated by the educational bodies or is it voluntary?

10. What are the activities performed?

It is on the website videos. Sprint, hurdles, standing long jump, high jump SCISSORS ONLY!) Vortex throw (imagine a Nerf football with a tail wind) and soccer ball chest push.

By the scoring tables set out under each event. Certificates are downloadable.

It is aimed at school years 5 and 6, that is ages 9 years to 11 years approximately. But teachers have said it can work for younger ages. With more feedback we could add scoring for younger groups.

13. Are the scoring tables similar to those of a decathlon or heptathlon? Are there 3-Star and 4-Star designations?

No! Scoring is 1 to 5 points as against marks provided under each event on the site. There are personal score sheets and a scoring guide on the site under Primary.

14. Is there a cognitive component to all this? i.e. – know the rules of the sport, demonstrate techniques, a pencil and paper test, etc.

There is a cognitive element in the “5steps” which are explained and demonstrated on the videos. On your other points, as explained earlier, the point of the scheme is to emotionally involve children in run, jump, throw. The technical aspects, as already explained, are demonstrated on the videos and the 5 steps, so learning them is inherent to the action as soon as a child has the desire to improve. That’s the point. If teachers want to add written testing to this they can do so. I think more valid would be to link 5S5S to other aspects of the curriculum, maths, English, art, history, science etc. But I don’t have the capacity to do this at the moment.

15. Are there any values you seek to establish? What are they and how are they assessed?

Values are “learning by doing”, for which there is much evidence of benefit for children, and the focus on personal improvement, rather than going straight into inter-personal or inter-team competition. I’m obviously not against the latter as an ex-athlete myself, but the understanding of personal improvement and the desire to develop accordingly underpins all competition—and life too!

16. What type of facility is needed for the testing?

Whatever is available in a school. Adapt the program to fit what you can do.

17. What is the procedure when an exceptional child is discovered?

HA!! Very unfortunately, and much as we would love to provide this, it is what we call here a postcode lottery! Ideally teachers would guide able (and enthusiastic) children to the local athletics club. (As I’m sure you know track & field here is voluntary club based, but the availability of good level coaching is a bit hit and miss.) But that would probably not happen until the secondary age group, and even then much talent goes astray.

18. What are some of the notable successes of the program?

I’ve seen some small schools using the project as I’ve driven past. And the kids loving it. That’s the success I’m aiming for.

19. Is there anything you’d like to see improved with the program?

It needs further development—as you’ve suggested in places. More feedback from schools on their results, more acknowledgement of children’s individual achievements and possibly more recorded evidence of athletic activity in schools. And perhaps some sponsorship in order to expand outside of Cumbria. We are now working on the Secondary version, which will be the standard athletics events, except where there are major safety issues, i.e. hammer and pole vault. High jump will be scissors only, with explanation as to why. We hope to be able to provide supplementary coaching days run by qualified coaches to ensure these events get due attention.

20. If someone wanted more information, where would they go?

To me. (The link to the 5Star5Step program provides contact information for Gwenda Ward. Additionally, there are embedded 1-2 minute video clips that give a good visual idea of how the different skills and tasks of the program are set up. http://5star5steps.co.uk/history/)

21. Thank you…are there any final comments you’d like to make?

I’ve probably said enough! Except that I don’t have a business background – we could probably do with someone who has this to help to get the scheme to its full potential, but without over commercializing it. Is there such a person??! 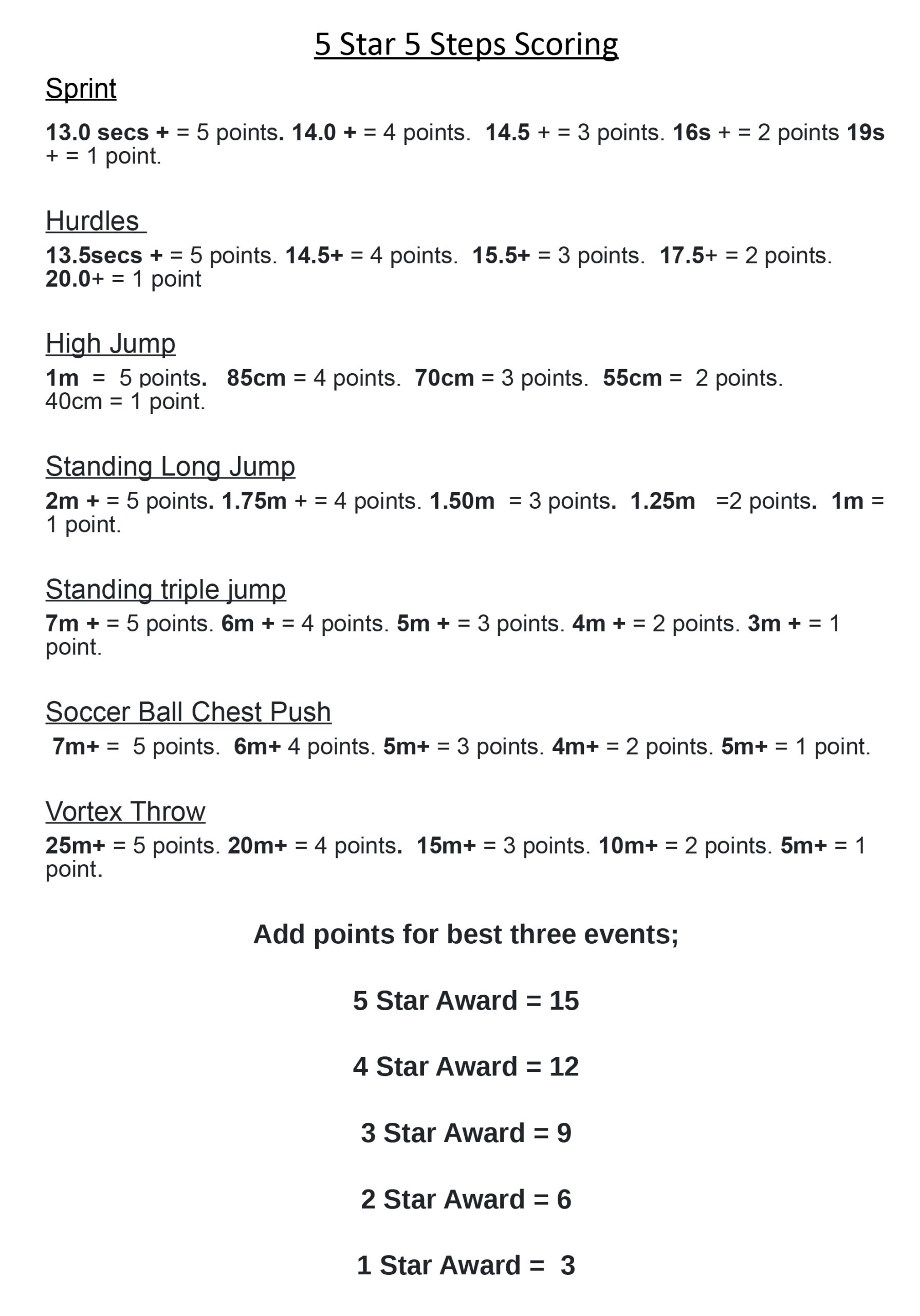 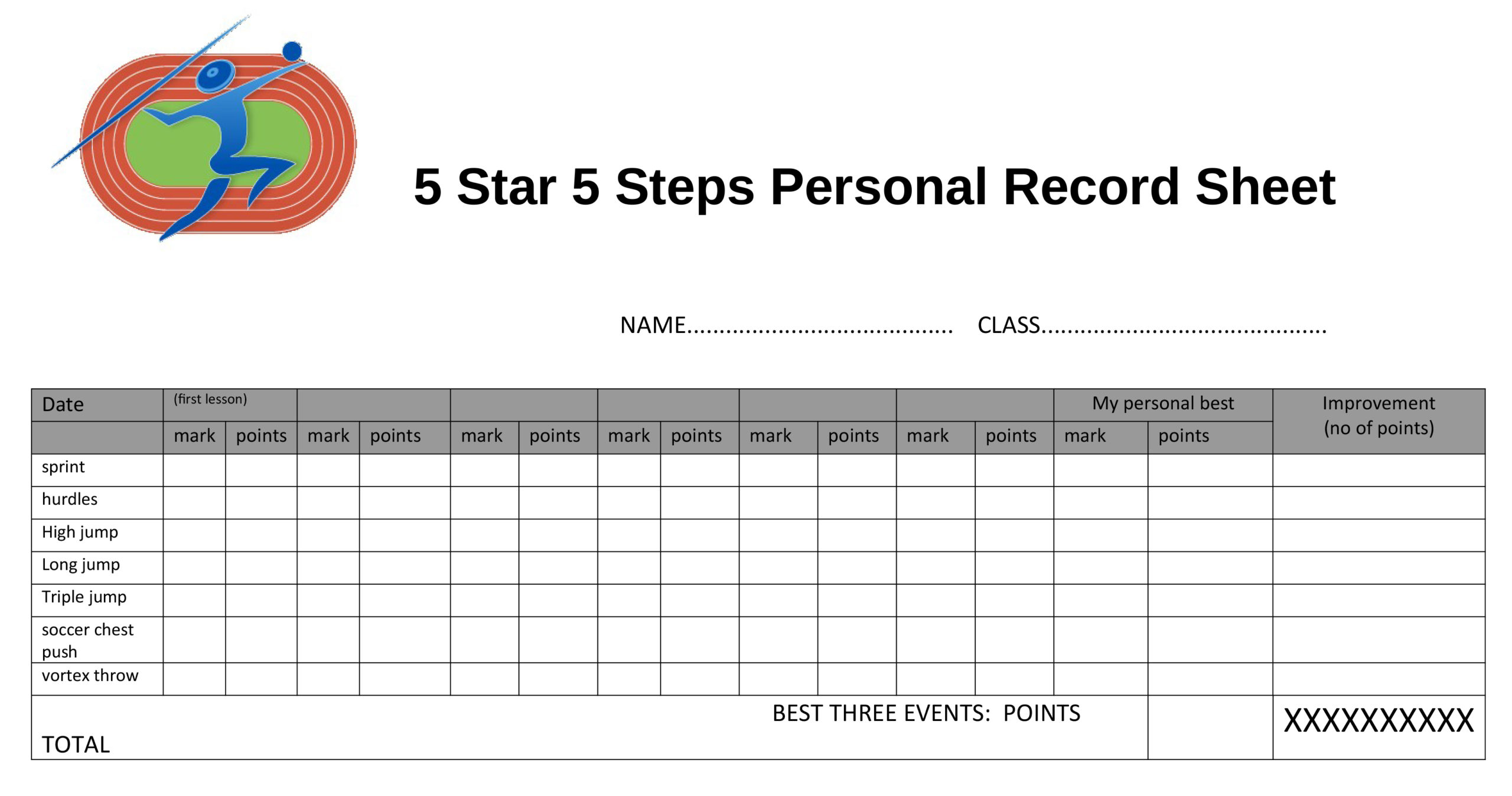