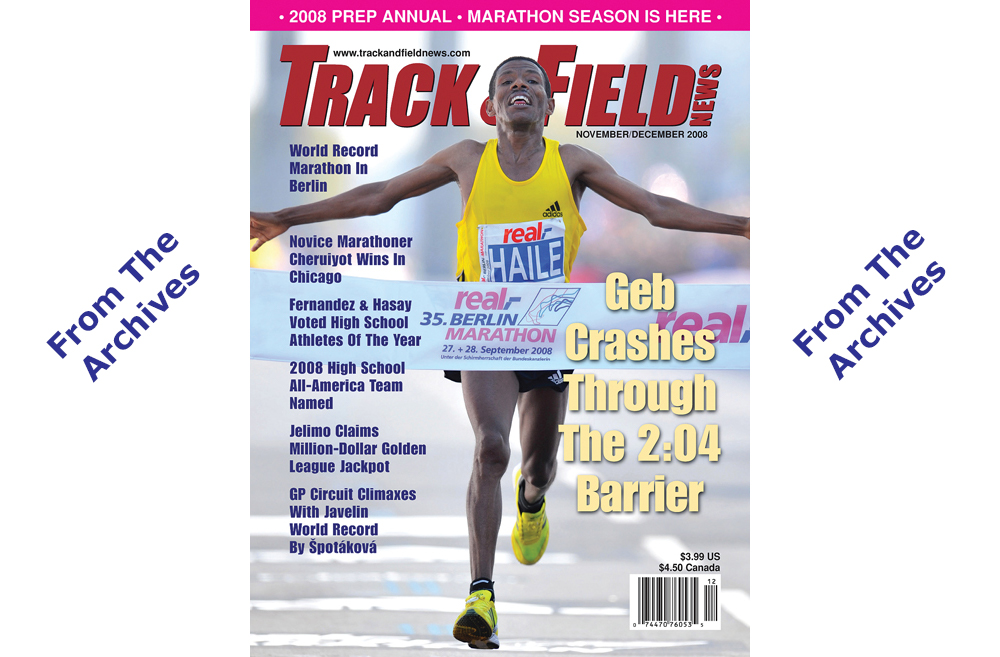 Time flies! The 45th Berlin Marathon will be run this Sunday. And it’s already been 10 years since uber-great Haile Gebrselassie became the man who took the World Record under 2:04 . It was the 26th WR of the Ethiopian’s career and T&FN‘s Sean “Professor Marathon” Hartnett was on hand to chronicle the feat. Hartnett’s account for the November/December 2008 magazine issue appears below for your rewind enjoyment. Since that barrier-breaker day 8 men have run faster still and Dennis Kimetto, the current WR holder, took the standard under 2:03 at Berlin 4 years ago. But an astounding performance Geb’s was. He achieved it in his seventh marathon 16-plus years after he appeared on the world stage winning a 5000/10,000 double at the ’92 World Junior Championships. Read on…

In a long career full of breaking both records and barriers Haile Gebrselassie achieved both in the Berlin Marathon as he not only bettered his own World Record but also became the first ever to run sub-2:04. Albeit barely.
“When you think of this record, it is one second,” Geb said with his trademark smile after a thrilling run that ended in 2:03:59 with a full sprint against the clock.
“Everything was perfect; the weather was perfect, the spectators were perfect, everything—I am so happy.”
The Ethiopian star’s 26th WR had plenty of drama—a fast start, some surprising competition from Kenyans James Kwambai and Charles Kamathi, and the riveting finish. Yet for Geb the real drama began a fortnight before the race.
After running a 20K time trial 40 seconds faster than last year, when he lowered the WR to 2:04:26 here, he felt a cramp in his left calf that had him wondering if he would be able to toe the line.
“Two weeks ago my condition was so wonderful, but because of this small cramp I had a doubt,” he said. “I missed six days of training, but then it was OK.”
He set off on his quest for history on a ideal autumn day with an escort of six pacers targeted for a opening half in 62:00 (he ran 62:29 last year). After a tentative 3:02 opening kilometer, the pace picked up with the lead pack crossing 10K in 29:14—which projected to a 2:03:14 finish.
The still winds and Geb’s magical presence sucked Kwambai and Kamathi into the ambitious romp—recklessly abandoning their more cautious plans for a chance to run with The Great One. The pacers eased back a bit, covering the second 10K segment in 29:37 and passed over the halfway mat in 62:05.
Steady pacing produced an identical 29:37 for the third 10K and lead pacer Abel Kirui carried on to 32K—along with the determined duo of Kamathi and Kwambai. Then in an instant Kamathi’s feet gave way to the pounding and Haile was alone with Kwambai.
“I thought that maybe Kamathi would challenge,” Gebrselassie said of the Kenyan who had sprinted past him to claim gold in the Edmonton WC 10K, “but this one, James, he was so tough and after 35K I pushed so much just to stop him.”
Haile accelerated in a powerful and smooth stride, demonstrating his prowess as a marathoner with a 2:52 for the 37th kilometer that put an end to the challenge. Running free, Haile lifted the pace further covering the fourth 10K segment in 29:07, and closed in on his 2:03 goal.
A 2:51 for the 41st kilometer put him on sub-2:04 pace, but sent him over the edge as his stride faltered with fatigue. “Things were very hard in that last K,” he admitted as the pace slowed to a 3:02 split. “It was not me.”
With the finish line in sight, the little man who a decade ago was the king of the big sprint finish, rallied in one more sprint against the clock. Twenty meters out he began to lean for the line and got across a mere tick under the 2:04 barrier and making history once again.
“I planned to run 2:03 something,” he offered, “but it is done—2:03:59 is still 2:03.”
Kwambai paid the price over the final 5K yet crossed in 2:05:36, good for No. 7 ever.
Irina Mikitenko also made a dent on the all-time list, moving to No. 4 with a sterling 2:19:19 win in the women’s race.
The 36-year-old German laid off the early pace of Ethiopian Askale Magarsa and Kenyan Helena Kiprop who blitzed the opening half in 69:37. Mikitenko followed in 70:05, content to run her own pace.
“I was not worried about the runners ahead of me,” she said. “I was running right on schedule.” Her patience paid off as she moved past Kiprop then ran with Magarsa to just past 30K Then she was on her own covering the second half in 69:14:

When "Professor Marathon” isn’t crafting topographical maps and pace charts for 26-milers around the world, he somehow finds time to teach geography at Wisconsin–Eau Claire, serve as the Founding Director of the Confluence Center For Chippewa River Studies and act as a DJ on a community radio program called “All Things 6 String." (Hint: Sean's the one in the photo who never set a World Record ?)