We’ve said this ever since our second set of predictions: 2018 continues to be a wild-wild world in the NCAA women’s predictions department.

After a week off during the pre-Conferences lull, let’s recap.

Wow! Got that? There will be a quiz.

Note that it has taken 5 iterations before we had somebody predicted to win twice. We started with Arkansas and then proceeded to USC, Georgia & Oregon before getting back to USC.

USC & Georgia were 2-3 last time, but despite each losing a point, they climbed into the 1-2 positions because Oregon’s stock took a big hit, our crystal ball seeing the Ducks worth 10 fewer points this time out.

If the meet goes as predicted here (and you know likely that is!), when we get to the climactic 4×4 the top scores will be Georgia 51, USC 43, Oregon 41. But Georgia won’t be in the 4×4, meaning that Oregon could tie them with a relay win, and USC (which is favored in the event) ties with a runner-up finish and wins with a win. If Oregon and USC do a 1-2 in the 4×4, that would leave a 3-way tie for the team crown!

There are 6 new individual leader changes over Chart #4: Aleia Hobbs replaces LSU teammate Mikaiah Brisco in the 100, Erin Finn of Michigan supplants Karissa Schweizer of Missouri in the 10K, Tarasue Barnett of Grand Canyon takes over the discus from Valarie Allman of Stanford and Taliyah Brooks of Arkansas surrenders the heptathlon leadership to Wisconsin’s Georgia Ellenwood. 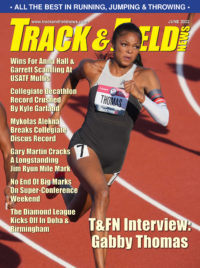